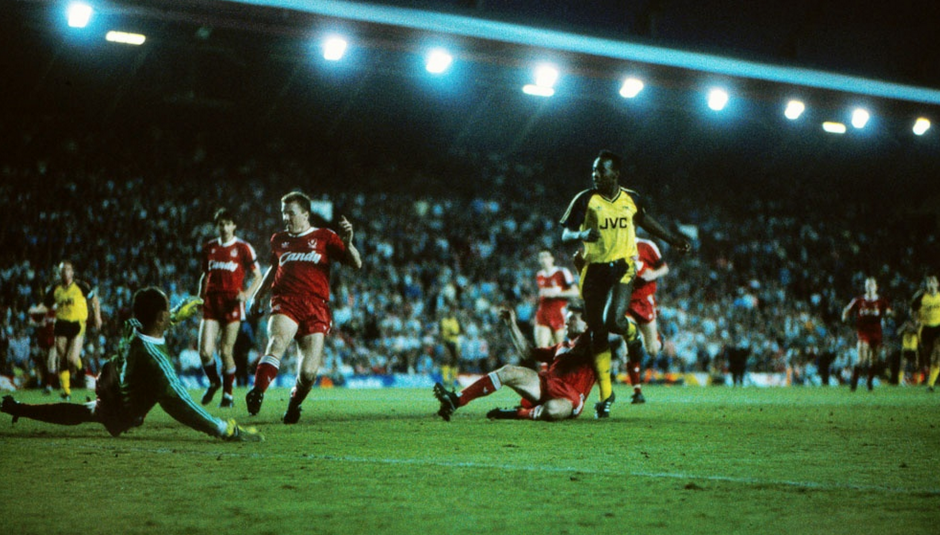 I have been fortunate enough to attend many wonderful games following Arsenal but nothing can ever come close to Anfield ’89 in terms of sheer drama and intensity. Its roots lay in Anfield ’88 when Anthony and I travelled together for the first time, having been introduced via mutual friends who recognised our kindred spirit and passion for the club. Regrettably, Liverpool were such a dominant side that year that our debut appearance in the away end was inevitably overshadowed by events on the pitch.

As I recall, Liverpool won 3 – 0 that day and my abiding memory was of Peter Beardsley chasing a seemingly lost cause, keeping the ball in on the touchline itself, picking himself off the floor and proceeding to set up another goal. Every tackle, every attack, every move was greeted with acclaim by the Kop, a swaying, roiling mass of noise, and we were well beaten long before the referee blew the final whistle. We rounded off the afternoon by standing all the way back on the train. Were we disheartened? Not a bit of it. We decided we would apply for season tickets together there and then as we could see, despite the result, that we had the basis of a good side.

The following season certainly proved eventful. Our youthful team proved dogged and feisty but they could also play a bit. They led the table for long periods and I well remember how they were applauded off the pitch in February at Goodison by the home supporters after dispatching the hosts 3 – 1. Even Gus Caesar played a blinder that day. Of course, everything was overwhelmed the following month by the Hillsborough disaster and our forthcoming fixture at Anfield was postponed until the end of the season. We had obtained our tickets originally from a lawyer friend of Anthony’s whose firm acted for the club and, by the grace of God, they remained valid. I cannot imagine we would have managed to obtain them otherwise, especially given the media frenzy post Hillsborough.

Liverpool did not play for a while in the aftermath of the grief that engulfed the city so Arsenal continued to accumulate points in their stead but, with the finishing line in sight, we started to stumble. Perhaps nerves kicked in for both players and supporters, given we had not won a title in 18 years, but Liverpool remorselessly ploughed on, energised by the emotion of the city itself and the country as a whole. Our penultimate home game against Derby saw us capitulate 2 – 1, a defeat notable for a superlative volley by Dean Saunders for the visitors. Worse was to follow midweek as we squandered the lead against Wimbledon to draw 2 – 2. Liverpool, naturally, kept going and thrashed West Ham 5 – 1 in their game in hand to take a three point lead into the denouement at Anfield.

Our manager, George Graham, remained confident about getting a positive result but there was a pervading sense among the fans that we had thrown away our opportunity. Liverpool were at home, they were in form and the force was with them. Anthony and I had pre-match concerns of our own. How were we going to get there? In their urgency to screen the game, ITV had not considered the pitfalls of showing it on the Friday night of a bank holiday weekend. Live football, however, was a major rarity in those days and this title showdown possessed all the right ingredients for a television audience.

The journey up proved a nightmare. Anthony drove, I entertained. Despite leaving early in the afternoon, we were confronted by shocking traffic. There were major roadworks outside Wolverhampton, allied to the usual incompetence of drivers blithely unaware there was a game on and a very important one at that. The congestion was so heavy we saw cars, vans and coaches, all festooned with Arsenal regalia, turning off the motorway to find a local pub to catch the game. We, however, would not be denied. Anthony pulled out all the stops extricating us out of the mire and flogged his MG all the way up the hard shoulder of the M62. We heard on the radio that the kick-off had been delayed by 20 minutes due to the congestion but, by the time we actually arrived at Anfield and dumped the car, the game was well underway. We ran like the clappers to the turnstiles and, miraculously, I found the one gateman still at his post. There were a couple of people ahead of us and the gateman insisted on escorting them to their seats first. We dutifully trailed after them, gaining an occasional glimpse of the action, before he finally showed us to our own. We sat down, Liverpool had a shot routinely saved by Lukic and Rush limped off. Thirty minutes had elapsed. It remained goalless but the rest of the half was something of a blur. We simply needed to absorb the occasion first.

The atmosphere was electrifying. The Liverpool crowd are conspicuously animated, draped in swathes of banners and flags, an indefatigable Mersey choir, immersed in the game, the club, the city. The only comparable set of British supporters in my experience are those of Glasgow Celtic, some 10,000 of whom descended upon Highbury for a testimonial for David O’Leary on a rainy Tuesday night and sang their hearts out from start to finish. Simply magnificent.

The Arsenal supporters down the far end at Anfield were energetic, if a little apprehensive. The margins were very fine. The team had to win to be level on points but required a two goal victory to clinch the title. Liverpool’s goal difference was four superior to that of Arsenal but, evidently, a two goal defeat would square it up. The action resumed and proved largely uneventful until the 52nd minute. A free kick was floated into the Liverpool penalty area whereupon Alan Smith applied a deft glancing header to nudge the ball home. As he ecstatically wheeled away, the Liverpool team, almost to a man, surrounded the referee complaining that the ball had gone in directly and should be disallowed. Ronnie Whelan, the Liverpool captain, led the protests as a posse of his teammates harangued the referee. To his great credit, the referee immediately shooed away all the Liverpool players and went to consult his linesman. They stood, almost nose to nose, deep in conversation, the eyes of the world upon them. We held our breath. They conferred for maybe thirty seconds and then the referee turned sharply away and pointed to the centre circle. The goal was given. Game on!

Anfield was pulsating and crackling hot at 0 – 0 but, suddenly, Liverpool, supposedly invincible Liverpool, were vulnerable, a goal behind, the weight of expectation upon them, looking uncertain whether to stick or twist. At 1 – 0, the atmosphere rose yet another notch as the Arsenal players and fans started to believe and the Kop responded in turn to rouse their team. Chances were few and far between. With about 15 minutes left, the underrated Kevin Richardson slipped Michael Thomas in but he rather scuffed a hurried effort and Grobbelaer saved. There was consternation aplenty at the other end as Arsenal pushed up in search of the crucial second goal and we witnessed Aldridge, Barnes and Beardsley break with Adams our only line of defence. For once, thankfully, Liverpool took the wrong option and overran the ball.

It was impossible to gauge when the game was due to end. Of course, we had a rough idea but this was before the age of fourth officials waving an electronic scoreboard around. There were numerous stoppages and delays as Liverpool knew a 1 – 0 defeat would be enough to secure the championship. The famous image of their midfield warrior, Steve McMahon, so graphically indicating there was only a minute left, will burnish the memory of every Arsenal fan but nothing will burnish my memory quite like the move in the dying embers of an extraordinary season. Lukic bowled it out to Dixon who, in turn, pumped a long ball forward to Smith. His cushioned lay off fell into the path of Thomas, ghosting in from deep. He took it in his stride, gained a fortunate ricochet off the defender, and was suddenly bearing in on goal.

We were at the other end of the ground and our seats were in the lower tier so it was difficult to judge the trajectory of the ball but Thomas waited and waited some more and then, just as desperate Liverpool players lunged in, he cooly jabbed the ball beyond Grobbelaer. For a nanosecond or so, time seemed to stand still until we saw utter bedlam in the away end and the Arsenal players cavorting with joy. There was one further Liverpool foray to repel but we managed it and, when the final whistle blew, Anthony and I stood there shellshocked, almost disbelieving, hugging, holding, mumbling to ourselves. We had won the title in the last minute of the last game by the tightest margin possible. We pipped Liverpool on goals scored, a just reward for our attacking football over the season. It was almost too much to take in. I vividly remember the fellow next to me saying that, despite the fact he was an Evertonian, he felt sick that Arsenal had snatched victory at the last but the psyche of the city of Liverpool was such that tribal instincts were secondary to the unity created in the wake of Hillsborough. I respected that as, indeed, I respected the newsagent the following morning who stocked every newspaper on God’s green Earth so we could properly drool over and celebrate accounts of that memorable Friday night.

The journey home, by contrast to the journey there, was pleasurable in every way. An Arsenal towel, draped over the car and flapping in the wind, made no secret of our allegiance as we and numerous returning supporters honked and hooted our way back to London for the real partying to begin. Yet one of my lasting memories of that extraordinary night of football is going to Chinatown for a late bite and observing the Liverpudlian public, mournful, disappointed and emotional, recognise, despite their private heartache, that we had conquered the castle fair and square. As with ports the world over, Liverpool is a melting pot of races and peoples, a fiercely proud and partisan city but imbued, nonetheless, with warmth and good grace, sporting to the end, a place for which I retain a soft spot, regardless of events on the field of play. Liverpool was a footballing leviathan but our sweet nip of glory, delivered with such a rapier thrust, presaged a relative decline in its fortunes and I am delighted they are once again serious contenders. The name itself always brings a smile to my lips. How could I ever forget Anfield 89?!

Man of the People

The Defects of Being Strong