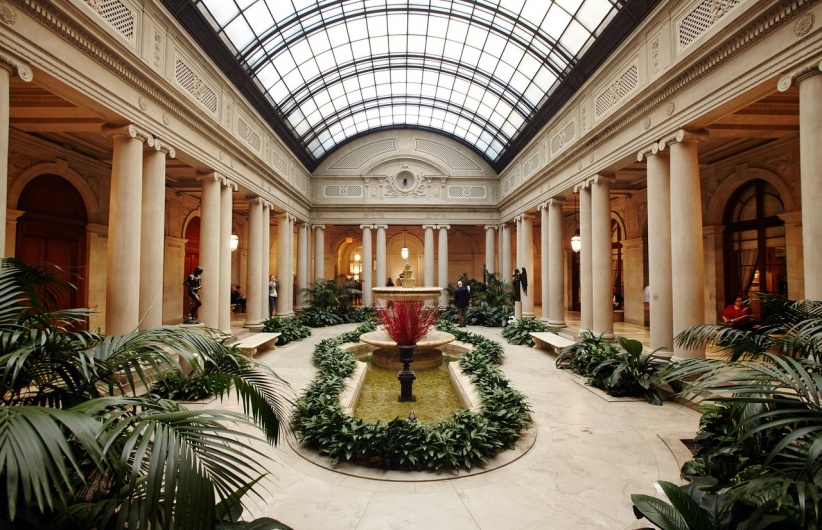 Last Thursday brought a quite unexpected treat. Business activity was polarised by an 8am conference call and a 5pm meeting and I suddenly realised that I had the perfect opportunity to wander around a museum at my leisure and, simultaneously, find sanctuary from the stifling city. New York was literally a city in heat, sweating profusely as the lank humidity enveloped it.

The subway was a revelation, however. That the station was clean and the train punctual was satisfying enough but, on stepping into the compartment, I was transported in more ways than one. The air conditioning was so cooling and so calming that I felt mildly disappointed that my rendezvous was only two stops uptown. Momentarily refreshed, I alighted and wandered in the vague direction of the museum. Having comprehensively proved to myself that I still had not mastered the city grid, I retired to an excellent café for lunch, enjoyed both sandwich and view, flirted with my book and marvelled at the sight of New Yorkers in various states of undress. I marvelled even more at the preponderance of large men walking small dogs and young men walking old women.

It was one of those rare days when there is a perfect symmetry in all one does. The subway trip was brief but invigorating, my initial walk aimless but diverting, lunch both fulfilling and illuminating. These were all themes that would be encapsulated at my destination and so it was, after getting lost again in a suitably agreeable way, I found myself standing outside that pintsized firecracker of a museum, the Frick Collection.

I could remember very little about my last visit except that I knew I had to come again. I certainly didn’t remember the sloppy customer care, epitomised by one long queue which grew ever longer until I pointed it out to the oblivious society matron ensconced at the front desk. Worse still was the surly security guard who was adamant that I could not bring my bottle of water inside but then waved me through without even a cursory frisk. Lucky nobody came armed with a penknife that day. Cultural terrorism takes many forms and I find it unbelievable that the custodians of such a collection could be so casual in this regard.

Once inside the main body of the building, my mood changed markedly. I was invited to take an audio guide about the collection and its contents, introduced by Samuel Sacks, the museum director, with further contributions on nominated works by resident curators and experts. And what a collection! It reminded me a little of the Uffizi in that, at almost every turn, one confronts a masterpiece. It is, of course, minuscule by comparison but I struggled to find a mediocre picture. Certainly, there were some that I enjoyed less than others but the Old Master component was outstanding. There were a smattering of impressionist paintings that were finely executed but this genre, on the whole, doesn’t make my heart sing.

I can’t honestly say I much lingered over the English portraitists either although all the usual suspects were well represented. I did appreciate, nevertheless, Frick’s clear desire to seek matching pairs although the most arresting example of this was a magnificent pieta, ironically acquired by Frick’s daughter to complement a similar work he had bought earlier. It transpired that the initial one was produced by a journeyman artist as a copy of the original but it is amazing that two versions, dating from around 1460, sit side by side. That first room yielded, in my view, two of the finest works in the collection, those by Van Eyck and Memling. The former had a most luminous quality while the latter’s portrait of an unknown man was compelling in its conviction and simplicity. As I moved from one room to another, I was entranced. Van Dyck, Hals, Vermeer, Rembrandt, El Greco, Titian, Veronese, Bronzino, Turner, Goya, Ingres and plenty more besides.

Frick was evidently a man of catholic taste as the house contained an abundance of furniture, sculpture, porcelain and silver. The porcelain holdings induced very different reactions, however. I found the Sevres collection, while technically excellent, almost overbearingly ornate and it drew no little comparison with the blousy qualities of Fragonard and Boucher, equally excellent in their way but which left me visibly pining for the austerity and clean lines of other periods. I prefer my romanticism a little darker. Conversely, I thought that the Limoges enamels, housed in Frick’s study, were magnificent. Shimmering as brightly as on the day of their creation, these were among the highlights for me among the decorative arts. Another notable item was a lapis lazuli occasional table, whose azure centrepiece was of the greatest precision, but it was the art reference library, looking a tad forgotten, that particularly caught my eye.

Arguably, the only disappointment about my visit is that one could gain no access to these volumes as none were on display. How fascinating, for example, to have seen a few copies, perhaps with Frick’s notes or annotations. It stretches credulity that such an immensely successful businessman, who left such an enduring legacy to the city, did not possess a significant archive relating to his art market activities. It may have been secreted elsewhere in the building but I saw no sign of it. What a wonderful opportunity to glean insights into Frick the man, in addition to Frick the collector, but it is, presently, an opportunity missed to imbue the whole experience with a more humanist dimension.

Overall, however, the Frick did the trick. The thick stone walls absorbed the heat and the collection absorbed me. My abiding memory is of a room containing El Greco’s St Jerome straddled by a pair of portraits by Holbein of the two great theological rivals of the English Reformation, Sir Thomas More and Sir Thomas Cromwell. I am bound to say that the former is one of the most exceptional portraits I have ever seen – the stubble on his chin almost glistens. On the opposite wall is Bellini’s St Francis, another seminal work, flanked by a pair of contrasting portraits by Titian. One displays a fey and sensitive youth, the other the bullish and imposing Pietro Aretino. This pair of pairs exudes ambition, intellect, power and aestheticism and it was in this room that I found the spirit of Henry Frick most prevalent.

My perfectly proportioned afternoon demanded I leave in reasonable time for my meeting. A modicum of urgency does concentrate the mind when one is so geographically challenged and I negotiated the return as serenely as the tropical conditions allowed. My meeting brought about a most interesting postscript to my day trip as, once the specifics had been attended to, the conversation turned to wider matters. On mentioning my prior excursion, my counterpart revealed that he was the personal lawyer to none other than Samuel Sacks, the museum director of the Frick. While he spoke highly of his client, he rather wearily informed me that the trustees of the museum were difficult and I had the sensation that I had witnessed a sliver of this difficulty simply trying to gain entry earlier that day.

I am sure that this is by no means an isolated case as I well recall Christopher Brown of the Ashmolean looking heavenward when we discussed his relationship with his own trustees. Surprising as it may seem to some, the paying customer is a rather vital ingredient in the equation. Time to sign off – I feel another letter coming.